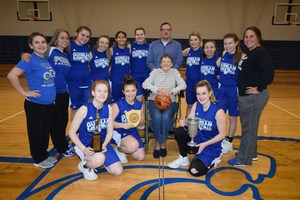 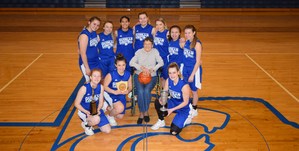 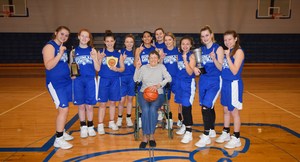 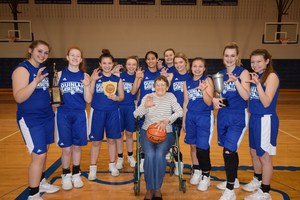 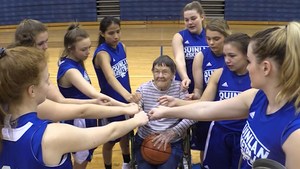 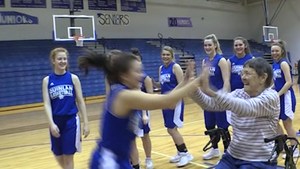 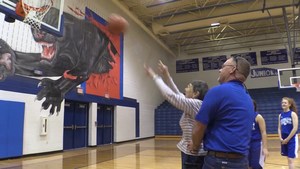 Bounce once.  Bounce twice.  Feet together, knees slightly bent.  One hand resting on the back of the ball to push, the other hand to guide your shot.  Aim for the back of the hoop.  Exhale and shoot.  Nothing but net.

Those steps represent a proven routine used by many high school basketball players who stand at the free throw line during a game.  They have a plan to succeed, they rely on preparation, and then they deliver.  At Ford High School in the Quinlan ISD, that same strategy was recently modeled for the District Champion Lady Panthers.  Unlike a regular practice, though, this routine wasn’t modeled by a member of coaching staff, but by a role-model player who understands the importance of longevity.

In preparation for the Lady Panthers advancement into the 2017-18 playoffs, Coach Jason Wallen called upon the skills of a former Panther All-Star to inspire and to encourage his team towards success.  Before their first round game, players gathered in the school gymnasium to meet and to listen to the advice of Ms. Mildred Hulse Allen, a 1940 graduate of Quinlan High School.  With attentive players gathered around her, Allen shared stories of her experiences as a student athlete, as a dedicated competitor, and about how she became a Girl’s Basketball “All American.”

While watching the Lady Panthers practice, Allen shared her belief that, “Basketball has so many little pieces to it, and so many little things that you need to focus on.  It’s easy to get lost in the little things.  You just have to worry about the final result.”

As a team leader, Mildred guided her 1940 Panther team to second place finish in Texas State Competition, and to an eventual fourth place title in National Competition.  During Allen’s playing days, the Lady Panthers achieved a record of 194-26, which included a 50-game win streak.  After graduation, Allen’s sense of leadership and work ethic earned her a 2-year selection to play for the Women’s National Basketball Association.

“It was interesting to hear Ms. Allen’s stories about when she played,” said senior player Ariel Forsyth.  “I watched her during our practice, and she was smiling and watching us go through our routines.  She has a lot of experience to share.”

At the conclusion of her playing days, Ms. Allen returned to her education background and served Quinlan ISD for the next 24 years as secretary to the district superintendent.  “I saw a lot of teachers and a lot of students during my time,” Allen said.  “A lot of them didn’t have much, but they always had their school.”  It was because of her deep belief in the students and in the community that Allen became instrumental in founding the first public library in Quinlan.

In 2011, QISD honored Ms. Allen’s athletic tenure, her dedication to students, and her support of the community by selecting her for induction into the Texas Trail Hall of Fame.

“Ms. Allen had great stories about playing for Quinlan.  I really appreciate her taking her time to visit with us,” said junior player Jazzmen Beierschmitt.  “It was fun to watch when she started shooting free-throws for us.”

As a student and professional athlete, Mildred Allen achieved a recognizable level of success.  As a school district official, she motivated hundreds of students and educators to pursue their goals.  As a community member, she worked tirelessly to effect the fabric of the town that raised her.  And as she sat on their sidelines and watched as the 2017 Lady Panthers ran through their practice drills, she became an inspiration.  An inspiration that reminds all of us to focus on the final result, and not to get lost in the little things.

As Coach Wallen presented Ms. Allen with a team-signed basketball, and as she held tarnished trophies from her playing days, the team gathered around Allen.  It was another team, another time.  And if you closed your eyes you could almost see Mildred Allen standing at the free throw line in 1940 going through her routine.  Bounce.  Aim.  Shoot.