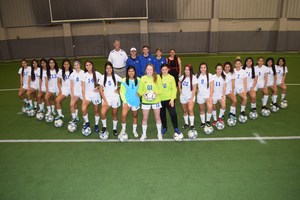 The Quinlan Lady Panthers’ Soccer Season came to an end last Thursday evening with a 2 to 0 loss to Princeton High School, in front of an enthusiastic and supportive crowd.

The first excellent scoring chance of the game belonged to Quinlan when Junior Midfielder Madeline Hudgins had a breakaway down the right side. She shot from 20 yards out, but the Princeton goalkeeper, who had charged out to cut down Madeline’s options, made an excellent save.

Freshman goalkeeper Tori Geisert, who had nine saves for the night, made a beautiful left-handed save on a long shot that was heading toward the upper right-hand corner of the Quinlan goal, Princeton’s best scoring opportunity of the first half. Most of Princeton’s other shots were from a distance and were easily handled by Tori.

The Quinlan forwards, Junior Jessie Alberto and Freshman Savannah Moreno, created several exciting offensive moments with their tenacious effort against Princeton’s quality defenders. Substituting for Jessie was Freshman Andrea Kaberline, who Coach Doug Miller had assigned the difficult task of “shadowing” Princeton’s #6, who starts a lot of Princeton’s offensive attacks, and who led her team in scoring this season with 21 goals. Andrea’s persistent tight–marking kept #6 from scoring and minimized how much this outstanding player was able to contribute to her team.

At the end of the 40 minute first half, the game was tied 0 to 0, and the game remained tied through the first 21 minutes of the second half. Quinlan almost broke the tie when Ashley and Julia combined several nice passes down the left side, including a final pass from Ashley setting Julia up for a right-footed shot from 18 yards out. But credit goes to the Princeton goalkeeper, once again, for charging out and making a beautiful save, diving to her left.

What proved to be Princeton’s game-winning goal resulted from an unusual play during a Princeton corner kick, when a foul was called against the Quinlan goalkeeper, resulting in a penalty kick. The Princeton player who took the penalty kick placed her shot beautifully into the lower right corner of the goal, and Princeton led the game 1 to 0.

Before the penalty kick, it looked like Quinlan’s defense was possibly going to push another quality team into overtime. This would have been familiar territory for Quinlan, as their record was three wins and one loss in four previous, heart-stopping, overtime/penalty kick shootout games this season.

The score remained 1 to 0 until, with only 3 minutes left, Princeton scored directly on a corner kick that squeezed through a small gap in the Quinlan defense at the near post. The Quinlan girls continued to fight until the final whistle, as they have all year. Quinlan soccer will lose seven graduating seniors this year, who have meant a great deal to the program, But the junior class is also solid, and 3 of the 11 starters all season were freshmen, and 2 were sophomores, so the future of Quinlan soccer looks very bright.

Quinlan finished the year with a district record of 7 wins and five losses, and an overall record of 12 wins, ten losses, and three ties.